It appears I’m aiming for a weekly-ish release schedule for Charset for the summer. As such, today brings Charset 0.5.2! You can find it on download page or, soon, on CurseForge.

The big feature of the week is the “storage.chests” module. It revamps vanilla chests. 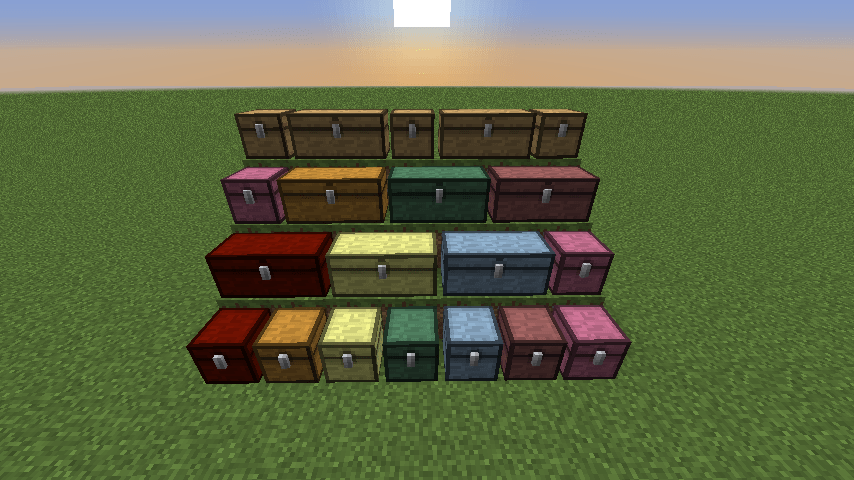 Now, you might notice they’re yet another CurseForge module. This is because a few people pointed out that Refined Storage and AE2 users often rely on chest patterns for auto-crafting being Ore Dictionary-able in regards to the wood they use. This mod, unfortunately, breaks that assumption, and so I did not want to lump it in with, say, barrels. However, after some consideration, the whole idea of splitting Charset into modules for Twitch Launcher users, while well-intentioned, may have been misguided and ultimately caused more damage and confusion than the ease-of-use it aimed for. I am considering moving away from the “split on CurseForge system” in favour of just three projects - CharsetLib, SimpleLogic and Charset. Please let me know through the Community links (that is, IRC) if you’d rather have Charset stay separate on CurseForge or have it become “one big mod” with the configuration being done via the modules.cfg file.

There’s also some other changes. SimpleLogic Gates got the ability to disable individual gates in its configuration file, as well as now has its gate slab texture match the resource pack used; there was also a notable bugfix to the SimpleLogic Bundled Cables (however, covering a fairly obscure edge case). As usual, many minor changes and refactors have also been made throughout. Please enjoy the mod!

PS. Unlimited Chisel Works received an update to 0.2.0, bringing an update of the Forge version used and support for GregTech: Community Edition.